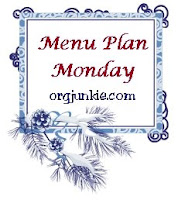 Happy February everyone! Ours starts with a joyous day--our niece is being baptized. (We were sure that this would be why the Eagles played in the Superbowl but they were merciful and bowed out two weeks ago. That also dropped the Eagles Cereal--I kid you not, it's faux-Cheerios in an Eagles-themed box, collect all 8 designs!--down to 2 for $3--yessss!) So that's our day today.

Alas, once upon a time, before the baptism was scheduled, before the dog tore her ACL, before I realized my work schedule, we had planned to go somewhere with a very big mouse with the kids this week. And that is clearly not happening. We're going next year anyway, so we'll just have to wait and I'll just have to be patient. I am sad to not be there, but we are full of fun things around here we keep saying, "Oh, this would be fun to do someday, wouldn't it?" And this week, we hope, will be "someday."

So, the meals are a little catch-as-catch-can, as we are going on some good local day trips and I'm hoping dinners will be out several of the nights. (Still cheaper than flights and a hotel, right?)

Meanwhile, January is over but my infatuation with The Splendid Table's How to Eat Supper cookbook is not. Some recipes didn't go perfectly--for instance, I'm embarrassed to admit, Dumbed-Down Rice. It was still crunchy in the middle both times I tried it. But there was a huge game-winning home run in the tarragon chicken with leeks. It was unbelievable and the recipe is below. I know, with a half a stick of butter, how bad can it be? But I'll bet (and will try and see next time) that even with half the butter it would still be great. The brightness of the lemon and the tarragon made it a really delicious dinner that my husband and I did not share with the kids. We're getting bad about that lately.

Something else I enjoyed was her Cheater's Homemade Broth, where you gussy up canned or boxed broth. It does make a difference. And there are a bunch of other ones to try in there that I just didn't get to, what with life getting in the way. But there are some amazing looking desserts to try, and a cauliflower soup I hope to make later today....and what I'm saying is, this is definitely worth checking out from the library to see if it fits your tastes and time because it is certainly working for mine.

Glorious One Pot Meals is in for me at the library; if it's really good, it might be my February focus. Certainly it's the right time of year! Otherwise, I'm very excited, my aunt is supplying me with some great resources; Once-a-Month Cooking arrived yesterday, and she's sending me her edition of Deceptively Delicious, so look for those in upcoming months.

Meanwhile, I played catchup this weekend; look at Friday's post for reviews of some of the recipes I've tried lately.

Monday: Curried Cauliflower Soup (from The Splendid Table) for parents, noodles for the kids

Tuesday: Spinach Lasagne Rollups (we lucked out in a big big way last week and had turkey lasagne from City Mouse-Country Mouse that we made last all week with salads and garlic breads and other sides, so I didn't get to this last week).

Wednesday: Leftovers or out.

Thursday: Finally finally trying the Real Simple Ravioli with Peas and Shallots thing. Or, if the sale is still on, might do my favorite country-style ribs recipe from The Joy of Cooking. I'll post the recipe if I go that way.

So that's our week in a nutshell. Can't wait to find out what we do this week. Tune in next week to find out! Want some more inspiration? Check out I'm an Organizing Junkie for the most inspired plans on the web.

Now, the recipe of the week, from The Splendid Table's How to Eat Supper. (Really, just from the title, how could you possibly go wrong? And it made me look up Jerry Traunfeld and now his cookbook is on my list too. Because dang, this was good.)

2 cups thin-sliced leeks, white and light green parts only (1 large or 2 small) (I love leeks so I used 4 small with no problem)
2 cups Cheater's Homemade Broth (on p.48 of the book) or canned chicken broth (I used canned College Inn)
4 Tbs unsalted butter
4 boneless, skinless chicken breasts (about 1 1/2 lbs, organic if possible) (again, with the hugeonic organic breasts our Co-op sells, two were a pound and a half, so I butterflied them for quicker, more even cooking)
Kosher salt and fresh-ground black pepper
2 tsp fresh lemon juice
2 Tbs coarse chopped fresh tarragon leaves

1. Place the leeks in a large skillet with the chicken broth and 2 tablespoons of the butter. Cook at a gentle boil over medium heat until they are tender and the broth has boiled down far enough that the leeks are no longer completely submerged. This should take about 8 minutes.

2. Sprinkle both sides of the chicken breasts with salt and pepper. Place them on top of the simmering leeks, spoon some of the leeks over the chicken, and cover the pan tightly. Reduce the heat to low. After 10 minutes, test the chicken for doneness; it should feel firm when you press it. If the breast pieces are large, it could take as much as 15 minutes, but don't overcook them.

3. When the chicken is done, transfer it to a warm platter. Increase the heat under the leeks to high, and stir in the lemon juice, the remaining two tablespoons butter, and the tarragon. When the butter melts, season to taste. pour the leek sauce over the chicken and serve.

They include herbal variations, and leeks-on-their-own variations. The one I'm going to try is the one for a leek and carrot side dish: Prepare the same dish using half leeks and half thin-sliced carrots with some crushed garlic. Finish them with a squirt of fresh lemon juice but omit the tarragon.

They also recommend The Herbfarm Cookbook by Jerry Traunfeld and if this recipe is indicative of what he's offering, this one needs to be on my list.
Posted by MemeGRL at 11:02 AM

i'm a big cardinal fan...looks like neither set of birds did all that great :(

Thank you for sharing about this cookbook. I am VERY interested, and the chicken tarragon looks very good. I have just recently started cooking with leeks, and find them yummy.

I think chicken recipe sounds delish. I'll have to try it.

one of the Paulas (AKA Houseofpaula)

Sounds wonderful at your house!! I love the Joy of Cooking. I go to the Splendid Table's website and look around, I'll have to check out their cookbook.

I haven't made lasagna roll ups in forever. Thanks for reminding me. :)

Hi all,
Brooke, I'm with you...there was nothing the Eagles could possibly have done better than the Cards...great game, heartbreaker for you all at the end though!
Stephanie, I hope you enjoy the recipe. I'm trying the carrot-leek soup tomorrow and will post on that eventually.
And Hi Paula! Welcome to my blog. Do let me know if you set up one of your own. I'm no LO but it's nice to have you visit.
Mom24, I think I need to add Joy of Cooking to my yearlong tour of cookbooks. I just don't use it enough and every time I go back to it, I wonder why I didn't grab it earlier. Country style pork ribs were on sale at my butcher so I swapped those in and wow, my house smelled great all day.

so who are you????
I think I know, but I need confirmation!!!
tipsybaker@gmail.com