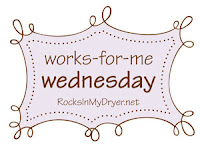 Alas, it's a little late for many vacationers but if you are still planning for a late summer getaway, this might work for you.

A few years ago, we went to D*sneyWorld with our family, which then included an infant and a two year old. We didn't want to deal with carseats so we decided to just stay on the Disney property the whole time. But what would our fussy kids (and not-yet-exposed-to-many-foods kid) eat? So I grabbed a box and popped in some sweet potatoes, feeding spoons, G*ldfish crackers, some other essentials, and then for good measure, one or two books and some extra wipes. I also tossed in some milk and juice boxes (double wrapped in zipl0ck bags), figuring the things with liquid were heaviest and hardest to carry.

The unexpected bonus? When we had extra souvenirs and some non-stinky laundry, we shipped it all right back home in the same box.

If you want to try it, give yourself plenty of time (I think I sent ours about 10 days before we left). Create a mailing label:

PLEASE HOLD for Guest: Name Lastname
Arrival Date August 26, 2009 (or whatever your arrival is, obviously)

Get a record from the mailing service you use of when it arrives and who signs for it, but especially if you are staying at any kind of hotel that has business travelers, they have a special room to store this stuff. (I did it all the time when I was working and had boxes of information shipped ahead of me.) If you are at a B&B or another smaller or family run hotel, check first to see if this is ok with them, but any major chain will hold it for you automatically and probably tell you at checkin that they have a package waiting for you. (And how fun is that?)

Shipping ahead works for me. Hope it works for you, too! For other ideas, check the WFMW carnival at We Are THAT Family!
Posted by MemeGRL at 11:30 AM 3 comments:

First, a note about all the recipes below: it's been a month of cooking. And while some of my lack of posting was summer malaise, some was definitely sheer laziness on my part. After months of creating menus of limited interest to anyone else in my family (not totally fair, but my husband, while he really appreciates great food, mostly is looking to "fuel the machine") I just gave up and we had weeks in a row of either Trader Joe's stuff from the freezer (STILL not restocked but hopefully I will be able to actually defrost it before, you know, the first frost--we did make lots of progress in that department). The pantry is also better. I have a world-class collection of baking supplies and can't wait for the weather to break a little so I can start baking cookies.

I'm late to the party but I have a total girlcrush on Taylor Swift. But only because she writes songs that remind me of my youth and how my own life turned out.

Best food discovery of the summer: sharlyn melon. Like honeydew but paler, and supersweet. Yum.

Also in the fruit department: from either Nie or C Jane, I found The Dish on Delish and this amazing summer fruit salad with honey-lime dressing. As she wrote, Thank me later. So easy and so yummy. Reprinted below but the blog is so worth looking at, I hope you click over.

In a medium bowl, combine the watermelon, nectarines and strawberries. Drizzle syrup over the fruit. Stir well.

In conclusion -
Make this.
Enjoy the praise.
Thank me later.

We used this recipe for the rainbow chard from the CSA, with only one batch chard and regular amounts of everything else. I liked it, but it was a little bland. I need to figure out a sauce that will punch this up a little but it was a good reintroduction to chard. Oh, and as a slave to Rachael Ray, I did sprinkle some nutmeg on there as well, like her grandpa taught her. I'm hopeless.

We made another batch of the most amazing granola ever, thanks to Alton Brown and the Tipsy Baker.

We tried a new chicken recipe from the rediscovered How to Eat Supper by the Splendid Table.

Inspired by Maggie at Say Yes to Salad, I had purchased a kabocha when I saw them in my favorite veggie store. (I want to call it a "stand," but it is clearly an actual store--you might remember it as the one that actually needs police guiding traffic the entire week before Easter, among other holidays.) They have an enormous variety of foods there--when I needed okra in a pinch, they had it; when I only need a cup of buttermilk, they have teeny little bottles of a local farm's for sale--and here they had kabocha, or Japanese pumpkin, though mine is apparently Mexican, which Maggie raves about All The Time. So I was inspired to try it. I made the not-fried fries with cinnamon only. They were a little soggy for my taste, and while it is more pumpkin-y than, say, butternut squash, there's still the squashy bitterness I'm not very fond of. But, you know, if you put enough butter and maple syrup on anything orange, it won't be too bad... And, I took the extras to the mountains and my one year old niece ate the rest of them in one fell swoop. She loved them! That was fun.

Fortunately for me, everyone at my CSA apparently does not enjoy fennel, so I made one of my favorite side dishes from the Silver Palate New Basics cookbook, for roasted potatoes, haricots verts, and fennel. (It really does need to be haricots verts--really skinny green beans--or it doesn't work. Though I don't know why I don't do this with just the fennel and the potatoes.)

And I tried the vegan sweet potato chili from the Year of Crockpotting site. I've had mixed success from her site and this was no different. I love sweet potato in Mexican food in general (I still grab any chance I can to get a sweet potato burrito from my favorite food truck, MexiCali, in Philly) and I liked them here, but I wasn't thrilled overall. I think it was the spices? Not sure. But it was easy and used stuff I already had, for the most part (ok, a 99 cent can of red kidney beans needed to be found), and I hope to figure out what my issue with it was.

In my eternal efforts to not heat the kitchen with the stove in the summer, I also tried the chicken and tomatoes recipe. It was ok. The meat was falling apart, which I don't love, because it ends up looking funny and I'm never sure if I'm going to bite in to a bone. Also? I'm not that crazy about herbes de Provence, as it turns out, but at least I got to use some more of the ones I had. And, my husband loved it. And I wished I were a better cook, or had one handy (like in my kitchen when I got out the leftovers) because my chicken was in almost a jelly. Since I had followed her directions (more on that in one moment) it was almost fat-free but it was a deep pinky-purple (from the tomatoes) and I'm sure would have had some great use if only I knew what it was. (Stephanie, the blog author, used hers when it was still liquid to make rice. If I make it again I will try that.) I do want to make it again but I also shudder at the thought. Part of the directions included removing as much of the skin and fat as possible, which was pretty easy for me as I had a fresh chicken to work with. But I had just read Farm City, and followed Novella Carpenter's adventures through raising, then killing and eating, her own chickens. And that was the same week as the Tipsy Baker discovered a rooster in her henhouse (no kidding) and dispatched of him as well. And I couldn't help but wonder what kind of life this chicken led that made it worth only $5.60 at its death. And its innards weren't entirely out so I needed to do that myself. And so, all these things combined and I had a really hard time eating this dish. Even the tomatoes, though they had done nothing but slowly roast and turn savory-delish. But...my husband loved this and ate every last bit, and kept saying, admiringly, "Really? You just put a whole chicken in there with some tomatoes and wine and it comes out like this? Because this is just great. So tasty." So I will definitely have this in the rotation, grossed-out-ness or not...and also because the CSA plies us with tomatoes on a regular basis.

I was going to say, You can't really mess up a lobster roll, but that's not really true: they can be totally mucked up if you put too much in them. But this recipe (from the indispensable Smitten Kitchen) was a delight. The only flaw is what you have to pay for a lobster. But mmmmmmm. And so much cheaper than a trip to Maine. And at least at my grocery store, they steam them for free.

Hey, where are my jicama fans out there? I always have enjoyed jicama but never saw it in the store. My veggie place had it though, and I bought it on a whim. Then Self magazine had a jicama salad with lime juice and fresh mint recipe, and I tried it. A little bland but I just love the texture of jicama so I snacked on it for a good while.

I keep getting pulled in to 101 Cookbooks! I made a few things to use CSA veggies: the cherry tomato couscous, the summer green bean salad...none were favorites but I did like the stringbean salad. Note: I had no greens, so it was a frisee-free salad, but I did love the dressing. Next time, I think I'd skip the olive oil in it though! And I tried the honey trick but I don't mind the bite of the lemon, so I won't do that next time either. And there will be a next time; I had hazelnuts to use and the cherry tomatoes are coming at a frantic pace right now. I also made many to "save" with the Smitten Kitchen slow-roasted cherry tomato recipe.
Posted by MemeGRL at 7:45 PM No comments: